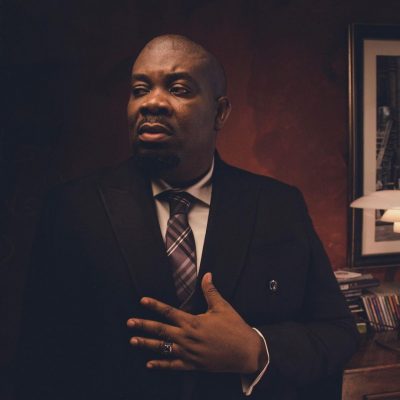 From his beginnings as a serial hitmaking producer to his transition into a music mogul with global dreams, Don Jazzy’s journey has come to define the expansion of African music in the last decade.

The producer developed a love of music from a young age, eventually mastering a number of instruments in his early teens.

He was first introduced to Nigerians in 2004 as the reticent yet playful producer and head honcho of the iconic Mo’Hits Records. During a period that defined a new course for Nigerian music, Don Jazzy oversaw the creation of classics including “No Long Thing”, “Rundown/Funk U Up”, “The Entertainer”, “Curriculum Vitae”, “Turning Point” – the best selling Nigerian album of 2008, and “Mushin To Mo’Hits” – adjudged by many critics to be the best Nigerian pop album of the last two decades. and introduced the world to D’banj, Wande Coal and Mo’ Hits All-Stars. Around this time, hits produced by Don Jazzy became recognized by the distinctive tag, “It’s Don Jazzy Again!”. Compiling a list of Don Jazzy’s hits is no mean feat.

With him at the helm, Mo’ Hits created the popular ethos of Afropop in the 2000s with smash hits like “Why Me”, “Bumper To Bumper”, “Over The Moon” and “Oliver Twist”. TIn recognition of his work, Don Jazzy also won a grocery list of honours – including Producer of the Year at the 2006 Nigerian Music Awards and 2007 Nigerian Entertainment Awards and the 2011 Headies . Having played a central role in exporting the continent’s pop music for global audiences, Don Jazzy’s Mo Hits locked hands with Kanye West’s G.O.O.D Music in 2011.

A new chapter came for the Don, as he is often called, when he kicked off Mavin Records in March 2012. The compilation album “Solar Plexus” served as the new team’s statement of intent as Jazzy set about building another African powerhouse.

The hits continued to come, and so did the array of amazing talent. Don Jazzy activated Tiwa Savage shortly after the label was founded, followed shortly by Korede Bello, Reekado Banks and Di’Ja – a trio often referred to as the Mavin 2.0 generation.

In 2017, Mavin Records activated LadiPoe and DNA, further strengthening the label’s roster. 2019 saw the launch of another chapter in the mogul’s inspiring journey.

Mavin Records secured funding from Kupanda Capital, an investment seen by many as a show of confidence in the label’s mission to amplify talent and deliver the utmost value through music.

Shortly after, the label announced Rema, a 19-year-old from Benin, Nigeria who has ridden the back of 3 EPs and years of experience to the multiple hits, a Barack Obama co-sign and the edges of global stardom. The next Mavin to be activated was Crayon, a 20-year-old Afropop prodigy whose versatility is displayed across his six-track debut EP.